They should tell you when you sign up for motherhood that you can’t back out. It’s a totally messed up thought, I know. But it’s all I could think during those first few days after returning home from the hospital with our fresh little daughter in tow.

Such thoughts came as a disturbing surprise to me. Despite my protests, other unsettling notions started to fill my brain space in the first few weeks of parenthood, notions that left me feeling guilty and boggled. I was powerfully and swiftly consumed by a force that contrasted sharply with the beauty of bringing a human into the world. One minute I was high on the euphoria of manifesting a much anticipated miracle. The next minute I was being swallowed by despair. The ground had dropped out from under me and I just needed somewhere, anywhere, to put my feet.

On a good day, becoming a parent is the scariest thing ever. Add crippling PPD to the mix and it becomes a nightmare. It’s one of those things that can’t fully be understood until you’re standing in it chest-deep with no observable escape. It’s an illness that after slogging through its clutches and coming out the other side is difficult to recall in a visceral way. It’s insidious how it strangles you for a while and then makes you forget that it ever had its hands on you to begin with. It’s either naive or remarkable that I am able to feel any amount of appreciation for such a challenging experience. Well, perhaps not appreciation for falling into a pit of despair, but gratitude that I had the internal and external resources to climb out and see it for the bastard it is.

An analogy about “needing darkness to be able to see the light” seems fitting, because in many ways it’s true. But the reality is more like, “You have to stare some evil shit square in the face to know that you can’t — and refuse to — let it move in to your guest room and eat all your food.” (Fortunately we don’t have a guest room. Occasionally we have food.)

If I am to summarize what one might call “guidance” or “truths” in the wake of depression or any other type of hardship, it would be this:

We’re doing great now. The Girl is two months old today! She’s sweet and sassy like her mom and passes gas like her dad. She is alert and engaging and observant and makes my insides gooey the way squishy babies tend to do.

I maintained a strict posting schedule over the last nine-ish months. I’m unsure if I’ll be able to keep a similar schedule going forward, but I shall consult with the Boss Baby and see if she’ll permit such a commitment. If not, I’ll post when I post, and the funny will continue the way funny does, even in darkness.

Thanks for reading. Much love.

It was all over the first moment I opened the front door this morning. I was bidding farewell to The Husband and as he stepped out into the drizzle, door hanging wide, we both inhaled the savory smells of oily meats frying for the first wave of breakfast-goers in the restaurant around the corner. We both groaned with a combination of pleasure and pain as the fleeting thoughts of bacon melting in our mouths entered and then exited our imaginations.

“Now I’m gonna have to get breakfast somewhere,” I said, feigning defeat, as Hubbs dropped his head and descended the stairs.

All I really wanted was greasy potatoes covered in Heinz 57, as per usual. It’s one of my most consistent pregnancy cravings. The eggs and meat and possibly coffee would just be a bonus.

I was/am in a place of indulging myself wherever possible and feasible. It’s been a dumpster fire of a week, the kind of week that starts off mediocre and each day seems to disintegrate a little more than the last until you’re left defeated and eating too much Taco Bell on Thursday afternoon.

I closed the front door and paced around the kitchen, living room, kitchen, living room attempting to soothe my anxiety over nothing in particular. I tried tricking myself from wanting potatoes with an oversized bowl of cereal but, as ditzy as I am these days, I’m still too sharp to believe substituting hashbrowns with cold cereal is anywhere near adequate or appropriate. I also tried distracting myself by doing some paperwork that very much required doing. While a valiant effort, I spent every other minute warding off The Potato Craving and it probably took me twice as long to finish filling out the forms.

This is getting ridiculous, I thought. Maybe you should just call it and go to the diner. You can walk there and get some of the exercise you’ve been avoiding. This was a nice notion, but wrought with three distinct problems: 1) Being in public and around other humans without my man-person is intensely undesirable right now, 2) The thought of eating alone, a swollen, dirty-haired pregnant woman covered in lint, makes me pity myself, and 3) It could start raining on my walk back home, and I just can’t be bothered to bring an umbrella. Thus, I successfully talked myself out of something I greatly desire. I’m really good at that.

Then I remembered Qdoba serves breakfast. And I remembered Husband saying they have really good breakfast burritos. And I have a car, and Qdoba is really close by, and my contact with humans would be minimal. I could just walk in, order, and leave to eat my burrito in the peace of my own living room, from the comfort of my couch/second bed. What a brilliant plan!

I checked their website. Opens at 9am daily. Perfect! It was 8:45. I could assemble myself just enough to be fit for public scrutiny, which doesn’t have to be much anyway because I’d be in Qdoba only for a few minutes before making my sleek getaway to inhale this mess of food from my own cave.

I arrived at 9:15. The building was dark. A sinking feeling pooled in my gut as I approached the door. “Opens at 10am” says the sign posted on the glass, mocking me. At this point I experienced a mixture of intense emotions that are difficult to describe, and even more difficult to choke down. It was a combination of pity, extreme disappointment, and anger. A complex wash of “Oh look at that poor pregnant woman hobbling over to a closed restaurant,” “It took so much mental effort just to get myself to this place and it’s all for nothing,” “That’s the only thing I want to eat in the whole stupid world right now,” and “I’ve once again been grossly mislead by the internet.”

I stood there for a minute while the tears started to come, feeling annoyed and embarrassed and pathetic and more lonely than ever. Fortunately it wasn’t long before my hunger reminded me why I was there in the first place (MUST EAT) and my pragmatism engaged.

Two doors down is a Biscuits restaurant. While barely a half-step above Denny’s, Biscuits serves the one thing I’m after, and this one thing doesn’t require quality. In fact, it’s probably better if it’s NOT quality. And by this time I was so determined to consume food that the fear of being out in the world was overshadowed by Mission: Cheap Greasy Potatoes.

I ordered the eggs and link sausages and hashbrowns with sourdough toast, knowing full well it would not be sourdough that I received. Sourdough has quietly disappeared from restaurants, discreetly replaced by potato bread or white bread or that thick toast named after Texas. All the while, sourdough remains on the menu, waitstaff keeps offering it as a bread option, and I’m still served all manner of non-sourdough masquerading as sourdough. It’s something that continues to confuse me, but I order sourdough anyway with the vague hope that it might actually be sourdough this time. (It wasn’t. It was the big toast from Texas.)

As I settled into my booth seat, I remembered that I was alone and eating in a restaurant. I don’t do it often, mostly because eating is largely a social thing for me, and if I’m going to eat by myself I might as well do it with food I’ve got in my refrigerator. (And also, I’m a cheapskate.) For a very brief moment, I was dipped in a wave of self-consciousness about it and anticipated some panic. Then three seconds later and for the remainder of my meal, I felt fine. I wasn’t lonely or sad or steeping in self-pity. I felt comfortable and happy to be eating and quite the opposite of lonely. I felt just grand.

Is it because I was actually there with my kid, too? Albeit in a slightly different yet nearby seating area, we indeed had breakfast together. The notion occurred to me as I squirted ketchup over my hashbrowns, opting to skip the Tabasco this time because of heartburn, but knowing they’d be delicious all the same.

Is that weird? I pondered. Is it weird that I can feel distinctly un-lonely because I’ve got a five-pound baby in my abdomen? I never concluded anything but I let the idea continue to calm my anxieties and soothe my lingering rage with Qdoba, the goddamned liars.

The best part: because my stomach has been flattened like a pancake by my expanding uterus, I could only eat half my breakfast. Which means I really got TWO breakfasts, the second of which I’d be eating roughly one hour from that moment.

Another victory for the pregant. 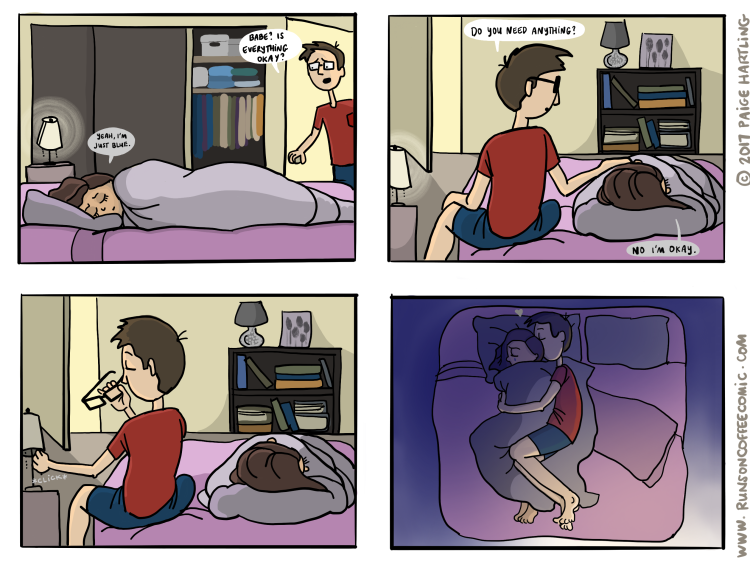 Kate and Darren are creative, introverted folks with a fresh little baby.  Follow them through everyday adventures as they figure out what being a grown-up means.